Happy new near to you! I spent the first week of 2018 on writing a demo application for picotm. The intention is to show what picotm has to offer and how system-level transactions work in a real program. In this blog post we’ll go through it and see what it does.

The demo application reads random data from Linux, puts it into several memory buffers, and visualizes the buffers’ content on screen. This is split among multiple threads, which segment the application into three major parts: an input thread, a number of processing threads, and a (text-mode) visualization thread.

But let’s start with a screen shot. At first, all buffers are empty. 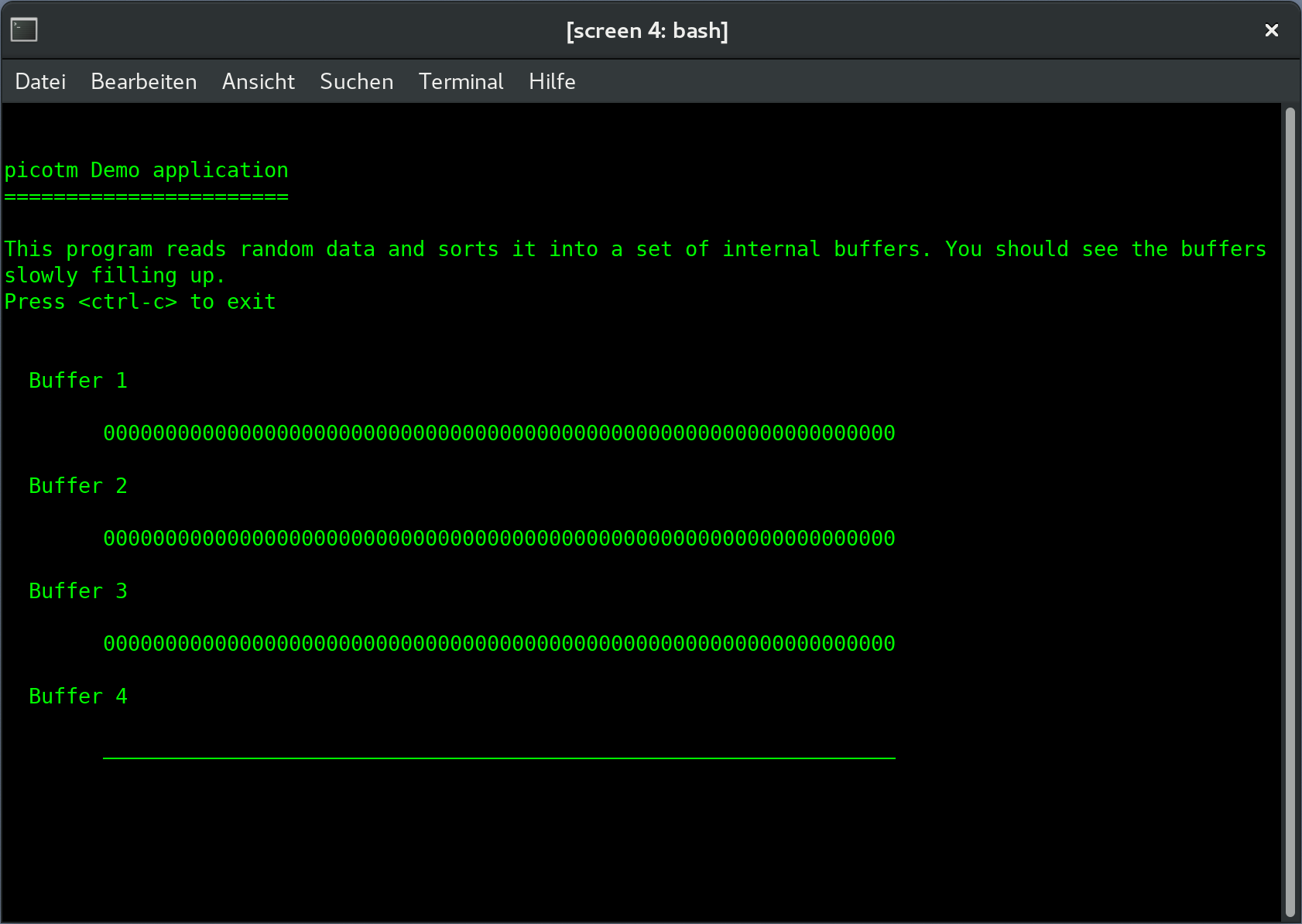 First of all there’s an input thread that periodically reads data from the operating system. It does so by opening /dev/urandom and calling read() on it once per second.

Remember that we don’t require error detection in transactional code. This is done fully automatically by the transaction framework. If anything goes wrong, the framework rolls back the transaction and jumps to the recovery code that sits between the commit and end statements. From there, we can try to repair the error and restart the transaction.

Next is the reading code. Again it’s implemented as a transaction.

Not trying to bore you with details, this transaction allocates a message structure named queue, reads the random data into the structure, and exports it from the transactional context. Again, if anything goes wrong, the transaction framework detects the error for us and goes to recovery. Because transactions cleanly separate the error detection from the recovery, we can re-use the exact recovery code from the opening transaction.

We now have a packet containing random data. Each data packet is forwarded to one of multiple processing threads. The forwarding transaction is trivial (as it should be).

Processing threads receive data from the input thread for further processing. Each maintains an in-memory buffer, where it stores the received data.

The following code removes the input thread’s data packet from the transactional queue. This is the ownership hand-over step of the data and the memory accociated with it. Once the processing thread reads the packet, it owns it.

The data is then copied into the memory buffer buf->field. The processing thread doesn’t really do much processing, but could in a real-world application. The transaction applies Transactional Memory for the copy operation (i.e., memcpy_tx() and memset_tx()). Our output thread will therefore be able to read the buffer content without interfering with the processing.

Again, you can see how we reuse the error recovery. Recovery strategies hardly change within an application, so the recovery code should be separate from the error detection.

At this point, we have received data from an input source forwarded it to another thread, processed it, and stored the results in main memory. A fairly common pattern in most applications.

The output thread, actually the application’s main thread, visualizes the buffer content. It periodically reads from each buffer and reduces the buffer’s content to a string of hexadecimal numbers. These strings are then displayed on the screen.

Just as in the case of the processing thread, access to each buffer is performed using Transactional Memory. Conflicts among output and processing threads are resolved automatically. Over time each buffer fills with content; a process that the user can follow by watching the screen. After a while the application buffers contain data. 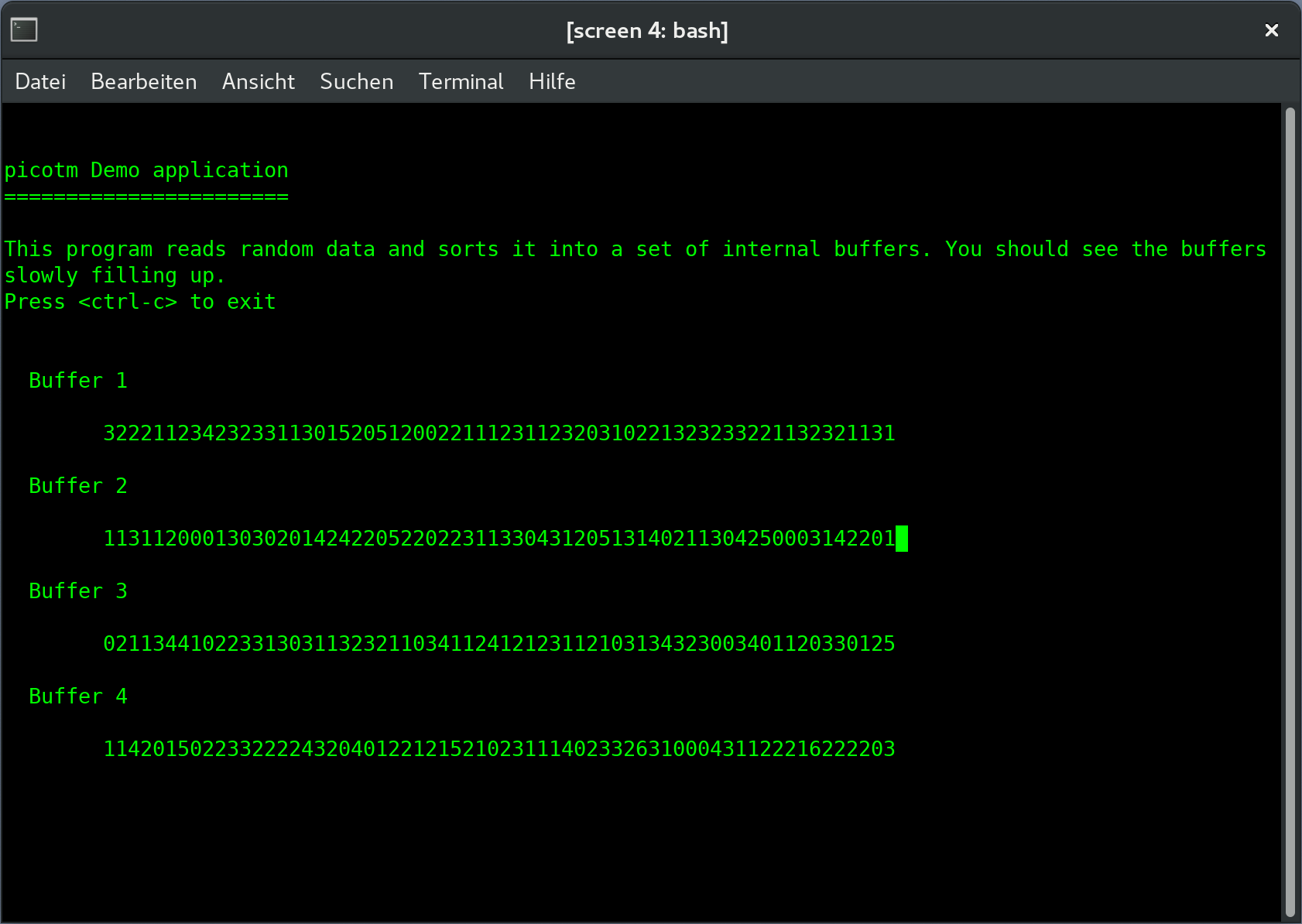 The full source code for the demo is available in a git repository on GitHub.